Archangel’s Prophecy by Nalini Singh
My rating: 5 of 5 stars 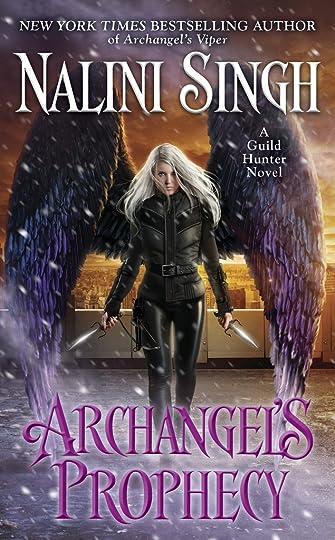 Midnight and dawn, Elena’s wings are unique among angelkind—and now they are failing. The first mortal to be turned into an immortal in angelic memory, she’s regressing. Becoming more and more human. Easier to hurt. Easier to kill.

Elena and Raphael must unearth the reason for the regression before Elena falls out of the sky. Yet even as they fight a furious battle for Elena’s very survival, violent forces are gathering across the world. In China, the Archangel Favashi is showing the first signs of madness. In New York, a mysterious sinkhole filled with lava swallows a man whole. In Africa, torrential monsoon rains flood rolling deserts. And in Elena’s mind whispers a haunting voice that isn’t her own.

This time, survival may not be possible…not even for the consort of an archangel.

This is the best, of the best of the Guild Hunter Series!

Oh… the ending.
Be prepared. I was shocked and surprised by it.
I really liked how the ending was narrated by the Primary of the Legion.

Raphael’s desperation to find a cure for Elena was heartbreaking and so honest and true.
His character seemed to devolve right along with Elena’s body.
The emphasis on Raphael and Elena’s vows of “we” and “together” in this battle against the unknown forces and prophecies is what made this story so amazing and the reason why I read Nalini Singh’s books. 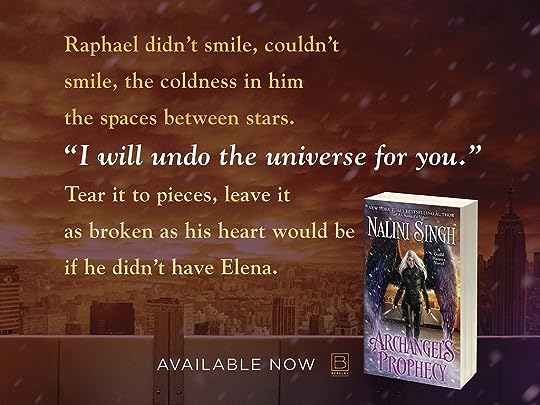 I know many people had a hard time with the ending of this book, but I believe that only good things are going to come with this new arc.

“Nothing will take you from me.
His fingers dug into her flesh.
Not even the Cascade.
The wind and the rain in her mind, a relentless storm she never wanted to escape.
He was hers and she was his, and together they were a unit that could not be torn apart by forces either mortal or immortal.”
-Raphael

“Enough of this.” His consort placed her palms against his glowing wings.
“You don’t have to save me, Archangel.
We are us.
That’s how we fight this. Together.” One hand against his heart.
“You’re a little bit mortal and I’m a tiny bit immortal. We did that to each other. We created the wildfire. We beat Lijuan. We’ll beat this together. The one thing we won’t do is surrender who we are to this menace.”
-Elena

“I will undo the universe for you.”
Tear it to pieces, leave it as broken as his heart would be if he didn’t have Elena.
“Tell Cassandra I don’t believe in the predestination crap, either.”
-Raphael

Lady Heather's Reviews I'm an avid reader. My Favorite Books: Right now I'm reading contemporary, urban fantasy, paranormal, and historical romance. I LOVE reading stories with sassy-smart-strong-funny-colourful women, with strong-protective-smart-disciplined, alpha men. About Me: I'm a hopeless romantic. I read ALL romance. The stories I read MUST have a Happily Ever After. I often re-read my favorite books. I don't like reading horror, stories that have infidelity, love triangles, books that are unnecessarily violent, and I ABSOLUTELY despise books that end abruptly *ghah* Words I try to live by: "Treat people the way you'd like to be treated"
Published November 6, 2018