The Wrong Man by Natasha Anders
My rating: 5 of 5 stars 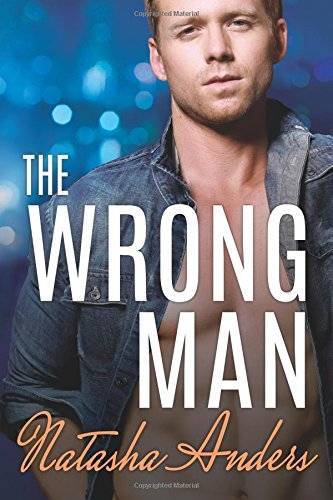 No commitments. No expectations. No way this could possibly go wrong…right?

Former special-ops soldier Sam Brand is used to getting what he wants. What he wants is to unbutton the buttoned-down, sweet, and shy Dahlia McGregor. He’s hot to find her wild side. She’s eager to let him explore it. So he makes his proposition—no strings, no hurt feelings, and no promises—save for one: she’ll have the time of her life.

After a broken engagement, Lia’s looking to someday find the right man and settle down.
That’s some day.
Now it’s all about the night.
A hot, meaningless fling with a magnificently weathered blue-eyed stud like Sam couldn’t hurt: he’s sexy, and sure he’s arrogant, but best of all, he’s here. In other words, he’s perfect…for now.

But when Sam is wounded in the line of duty and left in Lia’s tender loving care, all bets are off. Because the more time they spend together, the more it becomes clear: this “one-night” deal is getting steamier and lasting longer than they counted on.
It started as a fun little game.
Is it possible they could be playing for keeps?

No commitments. No expectations. No way this could possibly go wrong…right?

“5-I won’t settle for anything less Stars!”

This book had so many things about it that I liked and one of them being Dahlia McGregor’s character and how she grew from being a woman who was so used to being a person everyone expected her to be, to a woman who became self-confident, stood up for herself, and someone willing to have a “fling” that she set the rules for.

I also really liked Sam Brand’s character.
I liked how he grew from a man who was happy to not have any commitments to a man who could see himself wanting more… with Dahlia.

This was a wonderful story with complex characters and a journey that was difficult, but so worthwhile.

This story can be read as a standalone, but the reader would certainly benefit if they read the two previous books in the series just to have a better understanding of the secondary characters.

“I voluntarily read an ARC of this book.”