Iron and Magic by Ilona Andrews
My rating: 5 of 5 stars 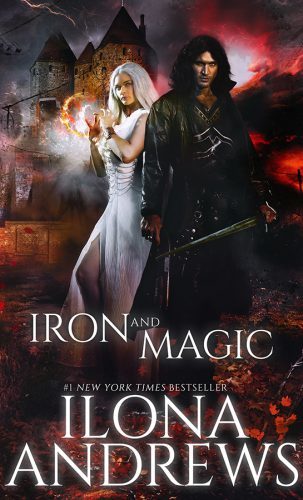 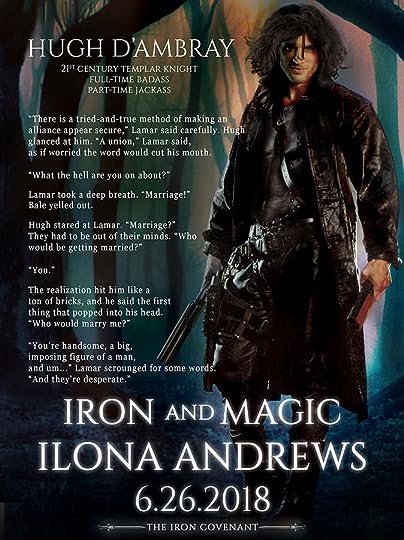 The world has suffered a magic apocalypse. We pushed the technological progress too far, and now magic has returned with a vengeance. It comes in waves, without warning, and vanishes as suddenly as it appears. When magic is up, planes drop out of the sky, cars stall, and electricity dies. When magic is down, guns work and spells fail.

It’s a volatile, screwed-up world. Magic feeds on technology, gnawing down on skyscrapers until most of them topple and fall, leaving only skeletal husks behind. Monsters prowl the ruined streets, werebears and werehyenas stalk their prey; and the Masters of the Dead, necromancers driven by their thirst for knowledge and wealth, pilot blood-crazed vampires with their minds.

In this new age, ancient beings awaken, brought out of their slumber by magic. One of them is Nimrood, the Builder of Towers, the man whose name terrified the ancient kingdoms of the Persian Gulf thousands of years ago. Possessing unimaginable power, Nimrood takes a new name, Roland, and sets about bringing his vision of the future. To build a new kingdom, one must first destroy the old. Roland requires a Warlord, a leader who will forge and lead his army, someone of great power and even greater cruelty, someone whose loyalty Roland will ensure by searing every shred of doubt with his own blood and ancient magic.

When shaping a human into a weapon, it’s best to start young. But when you raise an attack dog and, after you no longer need him, toss him out onto the street like garbage, don’t be surprised if he bites the hand that once fed him.

Hugh d’Ambray, Preceptor of the Iron Dogs, and former Warlord of the Builder of Towers served only one man.
When Hugh makes a mistake (he didn’t know he was only allowed to make one mistake) and is cast out by Roland, the man who was his “everything”, Hugh has a hard time adjusting to not feeling Roland’s presence or getting Roland’s approval.

At the beginning of this book, we see Hugh as a shell of the man he once was. But, as the story progresses, we’re taken on the start of an amazing journey of Hugh learning who he is and who he wants to be.
Oh, he’s still the cruel, manipulative, and cunning bastard he always was, but now he’s starting to get a conscious and has decided to fight for those he considers “his”.

Elara Harper is a perfect match for Hugh.
She’s mysterious, powerful, smart, and fearless.
She protects what’s hers, and she’s decided that Hugh is hers.

Ilona Andrew’s has done it again.
This is an amazing start to a new series with amazing characters and an awesome story-line.

I can’t wait to read the next book in the series!

“I voluntarily read an ARC of this book.”