Seconds to Sunrise by Nico Rosso
My rating: 5 of 5 stars

She thought she’d lost everything…

April Banks thought her website crashing was just a glitch. Starting the online forum for war widows has been the only thing keeping her together since her husband died, and she won’t let anything interfere with her work. But this is no technical malfunction—cyberterrorists have targeted the information locked in April’s website and they’ll do anything to get it. Even if that means removing April. Permanently.

Automatik gave former SAS agent James Sant a way to protect the innocent again. He thinks life in the shadows is all he deserves…until he meets his newest assignment. April is everything James has never let himself want and he knows she’s already had too much heartbreak in her life to risk feeling for him. But keeping things professional while hunting the hackers with the gorgeous widow is going to be the hardest job he’s ever taken on.

This book is approximately 75,000 words

The hero, James Sant is a retired SAS operator who worked as a contract mercenary after leaving the military and before He was recruited by the Automatik organization.
He believes the only way he can repay the debt he owes to society from working as a mercenary is to help as many people he can through Automatik.

The heroine, April Banks created a website called foundation.com as a project to help mourn the loss of her husband.
Her website ended up helping a lot of women who had also been married to military men, and who were all now widows.
When April’s website falls victim to a cyber attack and the data from the site is stolen, Automatik starts an investigating to try and catch the hackers.
James and his partner have had April under surveillance to ensure her safety.
This is where the story gets good, and all of this happens in the first chapter.

This story is well written, the characters well-developed, and the story full of action, suspense and of course romance.
I really enjoyed this book and can’t wait to read the next book in this series! 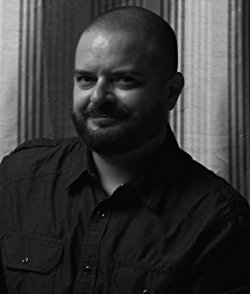 Nico Rosso was a writer in search of a genre until his wife, Zoë Archer, brought romance into his life in more ways than one. He’s created sci-fi and post-apocalyptic romance worlds, as well as working with his wife on the steampunk Ether Chronicles series. His paranormal Demon Rock series brought you satyr rock stars and the Muses who fed them. With the romantic suspense Black Ops: Automatik series, he takes you into the deep dark world of secret operations designed to protect the innocent. (less)