Our Forever by Elena Matthews
My rating: 5 of 5 stars

**A stand-alone spin-off from the Look After You series** 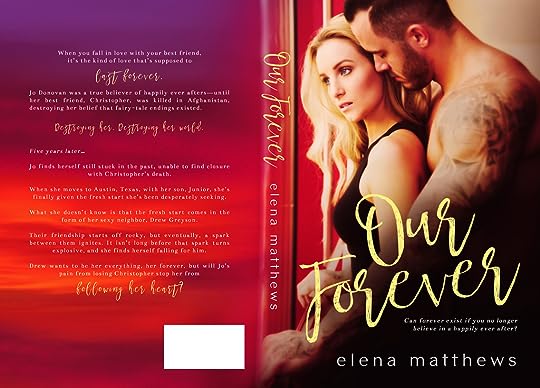 Warning: Recommended for ages 18+ due to explicit language and sexual situations.

Snippet
“I love that I was your first since Christopher, that I was the first to push through those hardened walls that you’d kept in place since he died. There should never be a day when you’re not worshipped, and I can imagine he thought so, too. There should never be a day when you’re not smiling because, when you do, you’re so fucking breathtaking that it literally hurts to breathe. You deserve the world and everything in it. You deserve forever.”
I let out a long sigh while my heart constricts in my chest. “I might deserve forever, but happily ever after is bullshit because forever doesn’t exist.”
“I’d like to put a wager on that.”
I stare at him with utter confusion. “A wager?”
“That I can make you believe in forever again.”
I cock my head to the side, smiling in spite of myself. “I didn’t realize you were such a Prince Charming.”
“I am. I’m just a badass Prince Charming with tattoos and a big cock but one who believes that forever is possible.”
I almost choke on my laughter at the big-cock comment. “Such the modest one, aren’t you?”
“Never said I wasn’t.” He grins.
“It’s a lost cause,” I add pointedly.
“Nothing that involves you is a lost cause.”
“So, what’s the time frame of this wager, and what do I get if I win?”
“Six months and a lifetime’s worth of cupcakes,” he says straight off the bat, almost as if he had been prepared for my question.
I smile before asking my next question, “And, for argument’s sake, what do you get if you win?”
He trails his finger along my cheek. “I get you.”
My breathing falters, and I look him directly in the eyes to see only honesty swimming through his sea-blue hues. I fall in love with his answer, and my racing heart only confirms that.
“Okay, but it’s your loss.”
“We’ll see, sugar.” 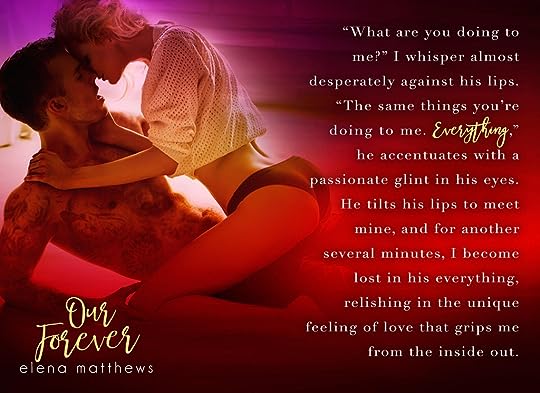 What an amazing story of second chances, healing, and learning to open your heart again.
The characters were fantastic, and the storyline was well written.
My heart broke for Jo and her loss.
She should have moved on by now … it’s been five years, but her ‘forever’ is gone and she’s just going through the motions hoping to put on a good mask so that her son doesn’t see the grief and pain she still lives with.
Until… she meets Drew. He’s the guy who lives across the hall from her. He’s the first person she’s met since she’s moved into the building. He’s also the guy she gave shit to at 2 am for playing his music too loud and waking her and her son up.

Right away there’s an attraction-chemistry between them… right from the first time he called her “Sugar”.
Drew gradually weaves his way into Jo’s life and the two become inseparable.
With Drew, she can see a future. He pushes her boundaries. He makes her laugh. He makes her feel again.
She realizes she doesn’t want to live another five years in a pain filled pit. The anticipation of moving on with her life with Drew excites her and scares her at the same time.

Drew is perfect for Jo.
He’s patient, caring, and just ‘there’ for her.
He doesn’t want to replace Christopher, but he wants to be Jo’s second chance at love.
For Drew, Jo’s his forever.

This is my favorite quote in the book:
“I don’t know how I got so lucky to find you, that the love of my life would move in across the hall, but I know it will take more than a near-death accident to tear us apart. That, sugar, is the forever kind of love I was telling you existed. You are my once-in-a-lifetime, whereas I’m your second chance. It doesn’t matter how we found each other or the short amount of time we’ve been together. All that matters is us. You’re my soul mate, my best friend, and I know I’ll never have to go without my sugar.”

This is the first book I’ve read by Ms. Matthews and I really enjoyed her writing, characters, and voice.

I look forward to reading more of this author’s work. 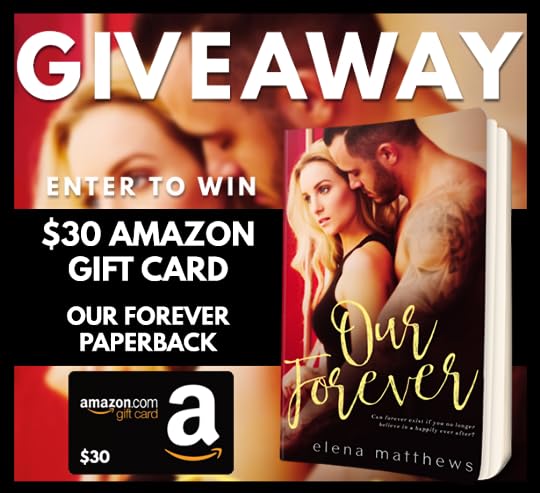 Playlist: (Which I friggn loved!)

Receptionist by day, author by night, Elena Matthews is from Manchester, United Kingdom, the home of Manchester United, MediaCity and of course, Coronation Street. When Elena isn’t writing, she can be found with her nose in a book or watching guilty pleasures such as Grey’s Anatomy. And when she isn’t doing any of those things, you can often find her on Facebook, obsessing over Kellan Kyle, book boyfriend extraordinaire.